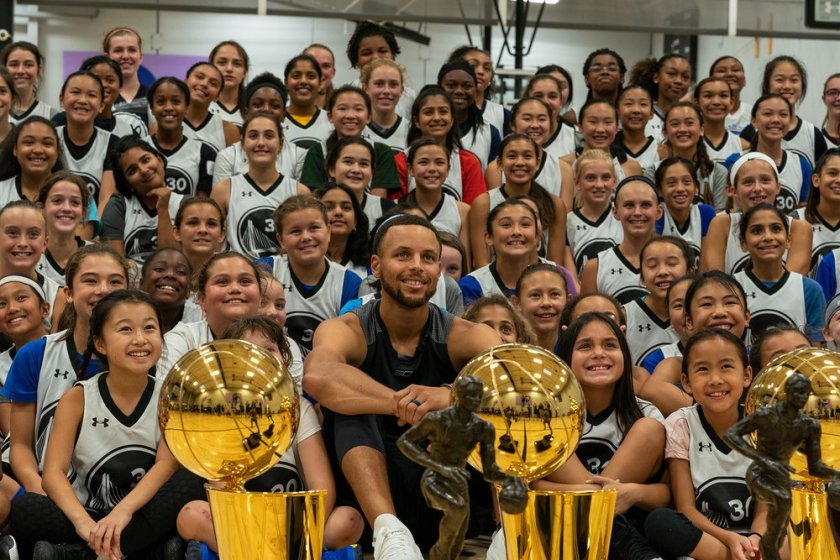 Last week, I did something I’ll never forget: I hosted a basketball camp for girls.

Let’s call it the “first annual,” actually, because I’m definitely planning on hosting one again. It was a lot of fun — just to share a court with 200 girls who love to hoop, and watch them do their thing.

But I think it was also something more than that. I think it was also the sort of thing that can help to shift people’s perspectives. So that when someone sees an NBA player is hosting a camp, now, you know — maybe they won’t automatically assume it’s for boys. And so eventually we can get to a place where the women’s game, it isn’t “women’s basketball.” It’s just basketball. Played by women, and celebrated by everyone.

One thing we’ve always maintained about our camp, is that we want it to be world class. And in 2018? Here’s the truth: You’re not world class if you’re not actively about inclusion.

And like I said, the camp was incredible. I’ve never seen a more engaged group of kids. At every boys camp that I’ve ever been to, you’ve always got some kids running around, acting wild. But this camp, these girls — they were about it. They were trying to absorb every single thing. They were running up to me after every drill, like, “Steph, Steph, I got some questions about how you trained as a kid. Can you look at my form?” It was special, man.

And the girls didn’t just bring it on the court, they also brought it off the court. We had a Q&A session with several successful women in sports and business, which historically have been fields dominated by men. And our campers blew me away with their questions. Just, like, the level of thoughtfulness and care that was flowing through them, and the maturity and nuance of it all. It really struck me.

One of the girls — she asked Ariel Johnson Lin, a VP at JPMorgan Chase & Co., about how, if she’s in a business meeting, and has a great idea….. but the meeting is composed of, say, eight men and then her as the only woman….. would she think twice about how to convey the idea? Would she switch up how she worded things, or her body language, or her tone of voice, based on the gender imbalance of her workplace?

Again, I was just blown away. I mean, we’re talking about a 14-year-old kid here, having the knowledge and sophistication to take a simple camp session to that level. And questions like hers — those really are the questions that young women continue to have to ask about the workplace in 2018. And that’s because it’s still so deeply ingrained in them, even in 2018, that inequality is just a thing you have to come to expect.

There was a long version, but I’ll give you the short one, which was: Be yourself. Be good, and try to be great — but always be yourself. You could see all of the girls at the camp nodding in unison, and I have to be honest: that was a really powerful moment for me. It was a satisfying feeling, to know we had put these girls in this position where they could connect with some role models, share their experiences and their ideas, and really just hoop, and be themselves — and feel like the main event.

But while that moment was satisfying … I’m not even close to satisfied. In fact, I’m feeling more driven than ever — to help out women who are working toward progress, in any way that I can.

This site uses Akismet to reduce spam. Learn how your comment data is processed.

Continue to be who and how you are, to astonish a mean world with your acts of kindness.